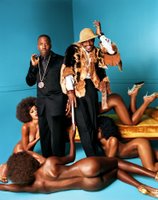 Sometimes sleep is the land where, instead of kicking back and taking a little vacation around the twisty corridors of your subconscious, you actually do proper things and devote quite a lot of mental energy to completing meaningless tasks. Take this dream which I had last night which left me weary as f*** and feeling like I'd already spent a day in the digital sweatshop polishing those ones and noughts:
For some unknown reason I had to pitch a fabulous new idea for a reality TV extravaganza that embodied the values of web 2.0. My idea? A japanese-style endurance/game show where 100 people around the globe were all given 60GB iPods, full to the brim with NOTHING but the collected (and repeated) works of severely overrated so-called hip hop geniuses, OutKast. And ONE track by hopeless scally indie nobodies, Cast. Each contestant would sit in front of a webcam, observed by adjudicators to make sure they never hit the skip button, and would have to constantly listen to the fearsome stylings of Andre Whatsisname and Big Boi until the one odd track came up. The first to reach the Cast track wins.
In my dream the show was called 'Outcast' (it involving the names of both bands and being a play on the term 'podcast'. See what my subconscious did there?) People would watch it solely for the chance to see 100 people go slowly INSANE in a small room to the strains of 'Ms Jackson'.
As you can see dear readers, it's been a tough month.
Back to the usual stuff soon folks...
Posted by Chris Jones at Wednesday, October 25, 2006

At one job, me and some mates looked for the worst album ever. Quite a lot of them you can laugh off, but the ones that do your head in are the ones from such called 'indie' bands as you mentioned.
Funnily enough we managed to play some of Cast's 'Beetroot' an album that in their words, not only went in a different direction but it was going to change the way we listened to music.
They were right, I had nightmares for three months and after three years of counselling I am about to come off the anti-depressants... Shit typing about it seems to have brought it all back.

Gorgonzola and magic cigarettes for supper again, was it?