This is a Mann's world 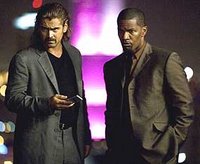 A series of mixed reviews won’t put me off seeing the latest Michael Mann film, no siree! So me and VCDH hit the Odeon in search of some truly mannly film action in the shape of Miami Vice. The disappointments were negliglible. The film delivers in spades.
A lot of negative reviews seem to bemoan the lack of chemistry between Crockett and Tubbs compared to the original TV series’ Don Johnson and Philip Michael Thomas. What they fail to take into account is Mann’s pedigree. VCDH’s hyperactive webness pointed me into a couple of articles that filled me in on some pertinent material to chew on. I discovered that I didn’t know nearly as much about Mann as I thought. For example, I didn’t know he wrote the first four episodes of Starsky and Hutch. So anyone who says that he’s not an expert on crafting cop/buddy plots is plain wrong. The film is peppered with amazing subversions of the classic two-shot. At the beginning you get a fantastic shot of them on a roof. In the background is the twinkling cityscape of Miami, Both are on their lovely mobile phones (this film is littered with fabulous technology, natch) facing away from each other. But Mann’s not implying a lack of chemistry; what he’s doing is concentrating the link to implicit body language. By mirroring each other they become the yin and yang of the law enforcement mechanism. Mann’s made so many of these kinds of connections (Heat’s De Niro and Pacino are the same person split across the legal borderline) that he’s now able to break away from the usual framing mechanisms and really subvert the way in which the relationship is portrayed. But time and again you get these muttered, terse, shorthand conversations between Sonny and Rico that seem like the kind of coded conversation that older couples indulge in. All private jokes and code that we’re eavesdropping in on. You’re left in no doubt that these men love each other (as the gloriously downbeat ending – true to the melancholy spirit of the original series: Sonny was always losing the woman because of the job etc - shows). Sight and Sound‘s in depth review focuses on a scene that struck me as well. Following Rico’s ‘love’ scene with fellow cop, Trudy (Naomie Harris), Sonny wanders into the kitchen and sits at the table opposite Tubbs. Their feet almost meeting, the woman relegated to blur in the mid distance. However the 'macho' tag that people always attach to Mann's work doesn't apply. It's about men, for sure, but the women in MV are assertive, tough, clever and totally in control of their worlds. cf; the shoot-out at the trailer park section (where Elizabeth Rodriguez gets to reprise Clint Eastwood's classic 'do ya feel lucky, punk?' speech).
It becomes obvious that the reason Mann returned to remake MV (apart from the fact that it was Jamie Foxx's idea!) was that he's honed his technique to an almost minimal degree - enough to remake a cultural signifier representative of the glossy, vacuous nature of the 80s into a tour de force of style over substance. Who CARES if it's shallow? It's just fabulous storytelling with pictures. What is most thrilling about MV's bravura technique is how it has the stamp of an absolute master all over it. It's the product of years of refinement.
Which brings me on to the BEST thing about MV: Its look. Why critics whinge about the ‘plot’ being flimsy is beyond me. For half the film I couldn’t HEAR most of the dialogue – but Mann’s so good he doesn’t need dialogue. That’s for PLAYWRIGHTS man. The implied violence of the white supremacist kidnapping at the beginning (only at the end do you find out that the victim’s head has been blown off with a noose of explosives) is masterful, with the camera lingering on the corner of a trailer with only a blurred tattooed forearm giving a clue. The camera seemed intent on leading you AWAY from the action at times. Crockett’s wandering gaze out to sea as a supplier is coerced; shots of crumbling villas in Colombia etc. He knows the value of location. He’s already painted glorious pictures of LA, but Miami seems even more suited to his visual language. How many thunderstorms glowered in the background? How BLUE were the glows of those mobile phones? Even a man squished under a truck was made somehow poetic. The cross cutting between DV and film gave incredible immediacy (the gun battle at the denouement was audaciously shot in its seeming randomness – while still making you feel that bullets were whizzing past your head).
But on top of all this pretentious guff lies the fact that MV is fun, fun, fun. 'Go Fast' boats, mejitos in havana, impossibly chic clubs, cars that shoot blue flames from the twin exhausts and a bad guy's lair that is (as VCDH put it) INSANE. Seemingly perched on a cliff high above some Colombian waterfall. Actually, Jamie Foxx's haircut is eqally insane ;-)If the film has any downsides they would have to be the somewhat sickly love interest bit in Havana between Farrell and Gong Li (looking v good at 41!), the slightly dodgy music (one gets the feeling that Mann hasn't really engaged with 21st century music - but at least he didn't resort to 80s retro and there's a MAD remake of Phil Collins' In The Air Tonight over the closing credits!) and the fact that at one point Tubb's girlfriend turns on a laptop and the scrolling code makes that SOUND that computers DON'T make as they show text. Apart from that, I think Mann's made another great movie. I predict in twenty year's time this will be up there with Heat. Give it time...
Posted by Chris Jones at Friday, August 18, 2006

Nice review, you share my sentiments, especially about the style carrying the movie rather than the plot.