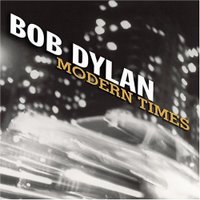 Another five years, another Bob Dylan album.
Worth the wait? Well, yes, but probably not for the reasons you were expecting! Some idiot rambles on quite eloquently here, if you need a proper summing-up. But quite simply, it's a playful, jocular, nostalgic and, most importantly, confident little gem. From Time Out Of Mind, through Love and Theft (with a brief stop-off at literary corner, natch) to here is a smooth, totally transparent journey of one man, coming to terms with his place in the world. Maybe Bob D's in lurve, but he's cracking wise, getting all biblical on G Dubya's ass and even managing to sound like a mutant hillbilly member of the Hot Club de Paris while he's at it. And he sings about Alicia Keys, so he's obviously 'keeping it real'.
For those of you who found the above para totally incomprehensible (yes, I'm aware that my idiosyncracies, worn on my sleeve in such a fashion make me somewhat undesirable to the cooler cats in town. I think this explains why I work alone hem, hem. I DO like ELO as much as Fennesz. That's why my credibility is shot ;-)) - other small silver round things making me smile are the three early Ultravox reissues (all arch Berlin Bowie pastiche, very silly but grown somehow cuter with extreme age), and the latest Del Boy Bailey disc. How's that for diversity?
Another gem that I picked up for a quid just the other day was Howe Gelb's 'Ogle Some Piano'(2004). Described as a cross between Thelonious Monk and Les Dawson (on the sleeve!) - Gelb's ivory tickling (in)capabilities really came to my attention on the wonderful 'I Am The Resurrection' - the tribute album to John Fahey. The above description is perfect. At times it's inept and disarming, at times he really can whip it out in a perfectly fine jazz stylee. Plus, the titles are hilarious. The man's a creative powerhouse. Met him back in about 2001, and he was the sweetest guy imaginable. far nicer than Kurt Wagner, who walked into the interview halfway through and was just plain rude.
Posted by Chris Jones at Friday, August 25, 2006