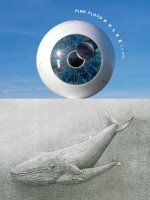 Last night, myself and EBP set the controls for the heart of Leicester Square to witness the premiere of Da Pink Floyd's Pulse DVD at the Vue cinema. Normally the prospect of an hour and a half of the Cambridge hippies in late-period (Division Bell tour) mode wouldn't have tempted us, but there was the added bonus of seeeing three of the (ahem) boys in a Q&A after the showing. Huzzah! Here was our chance to find out exactly how Nick Mason's drumming lessons are going and whether David 'don't call me Dave' Gilmour was still partial to the odd jazz ciggy.
Truth be told the screening was actually quite diverting, with the band opting wisely to show the entire Dark Side section of the show. I must admit that the rendition of the 'Great Gig In The Sky' left me with a small tear of emotion in my eye. That Sam Brown - she's got a lovely voice. Or maybe it was the free beer and the 5.1 re-mix that was doing it.
Anyhow, on shuffled DavID, Nick and Rick. Nick, fresh from his stint as traitorous scum with ol' Grumpy Roger in Hyde Park two days previous was obviously the butt of some private jokes between the other two - but on the whole it was damn entertaining. They wryly fielded ludicrous questions from mad Belgians and dullard journos in those plummy public school voices and quote of the evening came from Big Dave as someone asked where they could get one of Storm Thorgerson's giant eyeballs that grace the cover of the DVD (and were perched either side of the stage). Without missing a beat Gilmour said - "They were plucked from the eye of a blue whale". Nice...careful with that spliff, David.
Posted by Chris Jones at Tuesday, July 04, 2006

but how old are YOU?