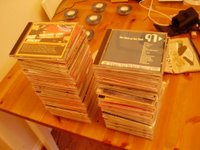 I'm sure i'm not alone here, but it suddenly occurred to me this weekend that iTunes is pretty useful when addressing THIS particuar problem - what to do with the piles of cds that accrue in your collection - all taken off the covers of magazines? You know it's true, you've kept 'em because either each one has, like, one or two tracks that you dig, or because at some point you felt guilty about not owning any Mark Eitzel or Townes Van Zandt or whatever and thought: 'one mythical day I'll get round to investigating them/him/her.'
No more! I spent a fairly dull, but useful afternoon flying my jet engines of rationalisation into these twin towers of wasted space and actually saved anything that looked vaguely interesting on my laptop. Some of these discs were nearly ten years old and had lain (some still unwrapped) at the end of my collection for all that time. Most offered up one or at most two tracks of middling interest, though I did save a few 'unknowns' just to see if I had been missing something all these years (ie: 'my god, Radio 4 are amazing! I never knew that Thunder were so good etc...' NOT). Anyhoo...I'm now working through all this stuff on the iPod and have discovered: a) a live version of Don't Fear The Reaper that actually has MORE cowbell! and b) Catatonia really couldn't write a song to save their lives. What's really irksome is the ability to substitute solid gold classics with horrible live versions recorded by line-ups that feature none of the original members, or 'interesting' mixes that were tucked away as the fifth track on a 12'' b-side etc. Still, I did find some nice Donovan tracks from his classic period, some prime Funkadelic, a Viv Stanshall track I'd never heard before and some very strange Beatles cover versions. 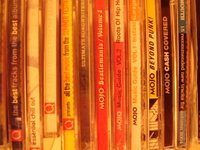 It's amazing how many times the same tracks or bands keep popping up. At some point (about 1999) REM's label really lost faith and whored them onto every free disc going (no surprise there, then). I think just about all of Yankee Hotel Foxtrot was given away. And good GOD, didn't Uncut and Mojo just BEG us to get into 'Americana'? How many Handsome Family, Calexico, Coal Porters etc. tracks did we really need? (actually I am quite fond of the first two, but most of it is po-faced drivel). And Elvis Costello's career seems to now exist entirely to fill up these things too. The ones from WAY back were most amusing, especially when you looked at the 'best of 199...' ones. whither Dubstar? Mazzy Star?? Shack?? Rockhead?!?
After about two hours I was left staring at the ridiculous 'Red Hot Chili Peppers' Jukebox' cd from Mojo and its preposterous sleevenotes saying 'People are always asking us about music, and we love talking about it.' Well you know shit about compiling a coherent compilation, guys. But the Harmonia track was nice...
Having done all this I'm of the opinion that, along with those bloody DVDs that you HAVE to have with your weekend paper (which also just sit on a pile somewhere until you move house again), the free CD is EVIL. It scares me to think of aliens rooting through our landfill and judging us on this stuff. 'Gosh', they'll say. 'An entire society that worshipped Neil Finn'. Yikes...
The only ones I've kept are Wire's Wire Tapper series. And they're pretty ropey too, if quite useful for clearing a room at the end of a party.
Posted by Chris Jones at Monday, May 01, 2006