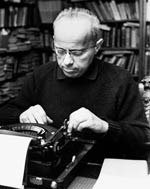 I'm ashamed to admit that until today I wasn't aware that my ALL-TIME FAVOURITE AUTHOR, Stanislaw Lem, died last week (nice obit in the Times here). This man was almost wholly responsible for dragging my adolescent ass out of mainstream SF rubbish and into the world of SF as a springboard to the realm of possibilities and satire (much in the same way that Ballard and Moorcock did as well).
I can still remember the copy of his Star Diaries which I must have borrowed from Earlsdon Library in Coventry at least ten times when I was about 12 or 13, so enamoured was i by his absurdist tales of the hapless Ijon Tichy, space explorer.
A couple of years later it was the Penguin edition of Solaris (coupled with A Chain Of Chance) which probably changed my life forever. here was an author who could terrify, twist your brain into knots and make you laugh out loud with equal aplomb. And let's not forget that he inspired Tarkovsky's (and probably Soderbergh's) greatest work.
I hunted down every single one of his books in translation (and even have originals in Polish too - even though I don't read Polish) and still return to them for intellectual succour at times of crisis. bye bye Stan, you were a mighty man. I'll miss ya...
Posted by Chris Jones at Thursday, April 06, 2006