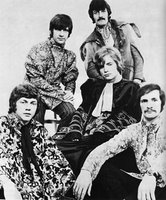 Currently on my desk sit the five newly remastered albums by the Moody Blues - dreaded Brummie purveyors of mellotron prog. Yikes, indeed...
What's amazing is that I've avoided this bunch as much as I could in the last 45 years. Several factors were at play here: The awful sleeves;, the bad moustaches combined with threads that made them look like swinging estate agents, even back in the late 60s/early 70s (I remember looking at the back cover of Threshold Of A Dream when I was about 13 and thinking 'Jesus, what a bunch of, like, SQUARES, man...'); and the weedy use of my least favourite instrument at the time: the FLUTE (sheer hypocrisy, I know. Never had a problem when Ian MacDonald or Peter Gabriel let rip. Mind you, Ian Anderson was always unpalatable).
But now with the benefit of inevitable hindsight I find quite a lot to value here. Justin Hayward's voice is simply gorgeous, while his axe skills are also pretty tasty. The mellotron is swoonsome. The spoken word sections while laughable, seem naively charming. Only Ray Thomas (the singing waiter) commits unforgiveable crimes on his obligatory one or two tracks per album. The (par for the course at the time) democracy in sharing writing credits always had its flaws. Just look at Hendrix's attempts to placate Noel Redding by allowing his songs onto Axis...and Electric Ladyland! And don't get me started on Creedence's Mardi Gras (J Fogerty's cruel indulgence of his jealous bandmates)...
Anyway, these Moodies are not at all bad. The Search For The Lost Chord comes across as kinda what an English Moby Grape would have sounded like, if Skip Spence hadn't picked up that axe in '67. Top prog psych. Maybe respect is finally due...if only Richard Madeley wasn't an uber fan.
Posted by Chris Jones at Tuesday, April 11, 2006