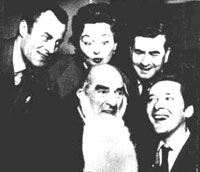 Ahhh...as this blog gets (slightly) more coherent you'll be introduced to the things that make me go 'mmm...', and as any fule kno, one of my absolute joys is the very wonderful BBC7. Almost a justification for digital radio on its own, for those who don't know, 'The Seven', as it's known in my gaff, plays the cream of comedy, drama and books, from the BBC archives and beyond. This means that you get to listen to the unimpeachable 'I'm Sorry I Haven't a Clue' and glorious old detective series such as Paul Temple ('By Timothy!')and Lord Peter Wimsey (Dorothy L Sayers' creation and possibly the ONLY detective who having tracked down a murderer will offer him the 'gentleman's way out' of their dilemma!).
Three recent absolute faves have been 'Kenny Everett's Radio Days' (actually his Capital Radio broadcasts, with all the music removed. The man was a genius at the homemade jingle - how many HOURS must he have spent on them?); Chris Morris' (natch) early Radio 4 ventures and finally and definitely not least: Round The Horne. As a child I could never figure why Kenneth Williams was so feted...ah, callow youth. His turns with Hugh Paddick are innuendo-strewn car crashes of audio delight. In fact the whole cast are awesome, and nothing makes a Wednesday morning more delightful. Well, actually, now I think about it...;-)
Addendum: Almost forgot - the other great raison d'etre of DAB radio has to be Classic Gold's Breakfast Show wiv the legendary Tony Blackburn. Sadly, no Arnold, but the perma-tanned anti-Peel is in amazing form these days. Fresh from his tustle over playing Cliff Richard , the man has reached the stage in his career where he don't give a f***. About anything.
Barely concealed cynicism and sarcasm now combine with old-skool DJ 'sincerity' to make a strange brew of groovy fogeyism. Listen now, before they shut him up. Who'd have thought that a reactionary ego of giant proportions could become so UNDERGROUND? Priceless...
Posted by Chris Jones at Wednesday, February 01, 2006