Numptiness...the greatest gift that I possess 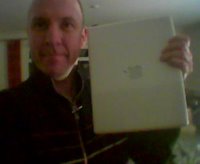 An evening of (not quite) despair with EBP. As explained before, the new iBook (see pic) is fab, but putting recording software onto it is proving somewhat time-consuming. Not for me, but for poor old EBP. I'm SUCH an ingenue with computers to start off with, but the combination of getting used to a Mac AND not being technically fab means I rely on the comfort of (not quite) strangers. Bless him, armed only with some cheap rose and some beans on toast he bravely soldiered on while I played him the worst of my CD collection. Cutting a long story short, the machine won, tho' the last ten minutes saw a little progress (tho not enough to allow any creative activity). And then he had to schlepp from Streatham to Finsbury Park in the coldest weather of the year so far...The man is a hero. But I remain a very frustrated computer owner. Now, what was wrong with that TEAC four track I used to own?
Posted by Chris Jones at Wednesday, January 25, 2006

oh, it wasn't that bad (though i can't believe we both sat there singing along to the eagles greatest hits). but music/video software is often like that - there are a lot of hoops to jump through and then you find there's some niggly little incompatibility that prevents any of it working (unless it's a thursday and the wind is blowing in a certain direction and you've got 512Gb of virtual ram etc). back to mono, that's what i say!

>(though i can't believe we both sat there singing along to the eagles greatest hits).
not sure I can believe that...